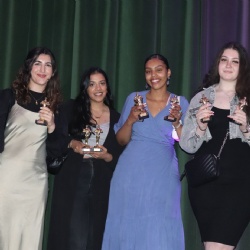 The glittering awards ceremony, based on the Hollywood Oscars, saw staff and students gather once again to celebrate the incredible creativity across A Level and GCSE Media Studies. Video production work included TV drama extracts and documentaries spanning a wide variety of genres and topics.

As ever, the students were decked out in finery as the spotlight shone on the recipients of the prestigious awards. Categories included Best Cinematography, Editing and Production Design as well as Best Actress and Best Actor – plus the People’s Choice awards voted for by Greenford students in assemblies.

Greenford High School Head of Media Will Halsey said: “It was wonderful to be able to run our first in-person Media Awards since 2019 and the students did not disappoint. The standard of the work was exceptionally high and it was great to see it on the big screen in front of such a positive audience. This work will be as good as any GCSE and A Level Media productions you will find anywhere in the country.”

Headteacher Mia Pye said: “It was such a fantastic night and the quality of the work really shone on the big screen. Congratulations to all our winners and nominees and well done to our students who supported the event so positively.”

The winners in full:

BEST A LEVEL DOCUMENTARY CONCEPT
Dania – No Friend But The Mountains